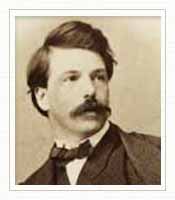 German romantic painter Oswald Achenbach was born in Düsseldorf (1827). He followed his brother Andreas Achenbach, to the academy in Düsseldorf at the tender age of eight, although the earliest officially entry age was set at 12. Unsatisfied with the academic teaching, six years later Oswald Achenbach left the Academy and joined two associations: association of Düsseldorf artists for their mutual support and aid and the Malkasten. Achenbach took his first trip to Italy and to Switzerland in 1845.

Until 1850, the influence of academic teachers such as Johann Wilhelm Schirmer is recognizable in his works. For him an initial experience was a trip to Italy, which draws his artistic work in the early fifties completely under the spell of Italian landscapes. In Italy he got to know the painters Arnold Böcklin, Ludwig Thiersch and Heinrich Dreber. He spent a longer period in southern France and Italy in 1950.

Already on the first exhibition successes of the young painter followed immediately public recognition. In 1852, the Amsterdam Academy named the 25-year-old painter an honorary member, followed by the academies of Petersburg, Rotterdam, Vienna, Berlin, Munich and Stockholm with the same distinction. In 1863, Oswald Achenbach inherited Hans Fredrik Gude and became professor of landscape painting at the Düsseldorf Art Academy.

His students included Albert Arnz, Gregory von Bochmann and Themistocles von Eckenbrecher. His worldwide reputation attracted more than 100 young painters from Russia, America and Scandinavia to study in Dusseldorf. He also recommended to his students the study of the works of his brother Andreas Achenbach as well as works by William Turner and Gustave Courbet. In 1872 he left his professorship and went in the following years on a long trip to Italy to Florence, Rome, Naples and Sorrento and a trip to northern Italy. Oswald Achenbach died in Düsseldorf in 1905 at the age of 77. His works can be found in numerous museums and private collections on all continents.